How to Engage Severely Delayed Preschoolers

Having weathered the travails of more than one job search in my capacity as a SLPA, I can say one thing for certain: very few people want to work with preschoolers.

One of the first questions the district officials and agency head-hunters always ask is, “Are you willing to work in preschool?” If your answer is “yes,” you will be employed in a matter of days.  Not being one to balk at a challenge, I decided to take a job working with preschoolers. However, these were not just preschoolers with your run-of-the-mill articulation and language delays. They were the most severely delayed due to autism, ID and Down Syndrome. Furthermore, they were socially disadvantaged preschoolers attending public school in the most blighted areas of Compton, California. With a bit of trepidation and much hubris, I spent a year commuting two hours from my home in Pomona to Compton, falling in love with the most precious bunch of 3-year-olds imaginable and making many mistakes which, in turn, led to many discoveries.

My first mistake was in assuming that a 3-year-old would want anything to do with me, let alone sit at a table for 30 minutes of speech therapy. This mistake led me to the discovery of my true task—engagement. For what I didn’t realize, is that there is not one molecule in the body of severely delayed preschooler that cares about behaving or pleasing adults. Because of their age and their delay, they are operating on the level of almost pure instinct. Any attempt at interacting with them, apart from strapping them into a chair and forcing yourself on them (not my preferred mode of therapy), requires finding the sense that most stimulates them—visual, auditory, taste, smell, touch—and incorporating that sense into a communicative act. I had to break into their worlds through their physical senses and then find both an impetus and a method for them to enter my world. It reminded me of those early infant months of trying to woo a response from my own babies.

My second mistake was in assuming I could look up some therapy method online that would spell things out for me or give me a step-by-step process that would miraculously open the mystery that was each precious child. My discovery was that the therapist working with preschoolers is more artist that anything else. Therapy with these children was to be one of the most creative processes of my life. From moment to moment, I was, with this little being, creating meaning through whatever means necessary. It was rarely in the form of spoken words. It was mostly in the form of gestures, noises, eye-contact and facial expressions. The medium that allowed this creative act ranged from the elegant simplicity of blowing bubbles to the relative complexity of placing tiny play animals or foods into categories. Some people call it “play therapy.” It should be called “The Art of Play.”

Throughout my year in Compton, I amassed quite the collection of materials and toys that I found to be effective in drawing severely delayed preschoolers into meaningful communicative acts. However, be warned. These toys are not the key. True communication must always be predicated upon your close attention to your partner. At this level, that means watching and observing the body, the face and the movement. It is vital that you are emotionally present. You must go into the child’s space physically, but also mentally and emotionally. Watch the child and dive into their interests. Especially early on, it may be enough just to sit near them and watch what they touch and how they touch it. If they can play imaginatively, note the stories they like to tell. If they are autistic, find the patterns they like to repeat so that you can creatively break in.

Use cause-and-effect in any way possible. Knock down block towers. Find toys where you push/pull/twist a button and have a character pop up. Pop bubbles dozens of different ways. Bang on a xylophone or a drum. Have fun with it. Make sounds of utter surprise and joy at the various sounds and sensations triggered by each action. While it may seem infantile, this stage of cognitive development is extremely important in the acquisition of language.

I found Milieu Therapy quite effective in creating engagement opportunities. A very effective method for me came after I had played a game a certain way a number of times. I would randomly “make a mistake” or change something up in the game. For example, a child and I would build the same type of block tower over and over, but I would unexpectedly position a block in a different way. Or, while at the playhouse, I would place mom in bed rather than in a chair.  At the very least, this would evoke eye-contact. Once in a while I would get not only eye-contact, but emotions and gestures. Best of all was when a child would try to force my hands to do things the right way. Sometimes, if I pulled away, I could watch a theretofore non-verbal child utter his first sound!

I bought most of my materials at the Lakeshore outlet in Compton. They have a huge warehouse where slightly dented or “missing item” toys can be purchased. I was able to buy $50.00 items for $30.00. Despite this, I spent quite a bit of money. You don’t have to. Equally stimulating materials can be made with cardboard or amassed with old toys from the thrift store. I know an SLP who used three large pieces of cardboard taped together for a background, old stuffed animals and Velcro to create the most amazing magical outdoor scene. For nonverbal and severely autistic children, a tried and true way to “break in” is by simply taking turns placing objects in a container. This requires nothing more than an old coffee jar and some old checkers. I found that play-dough or clay works like magic for autistic children who tend to become overstimulated and violent. It is messy and you must watch that they don’t ingest it or rub it in their hair, but its soothing tactile properties have saved the day for me many times.

Yes, severe preschoolers do become violent. Some bite and scratch. Most run away from you sporadically or constantly. I’ve been knocked in the face with toys, hit, spit on, licked, inappropriately touched, urinated on, jumped upon and kicked. These types of assignments are not for the faint of heart. But I urge you, if at all possible, to give preschool therapy a go. You will grow as a professional and a human being because, I contend, feeling inept and powerless is always a growing experience. You come to realize what you’re really made of and how much you really have to learn. It’s a hard knock that turns into a gem of wisdom. Happily, you will also be greatly rewarded. Sometimes your reward will be affection and love. Mostly, it will be the fact that you knocked down the wall, even if just one brick, that keeps a precious child locked in silence and isolation. 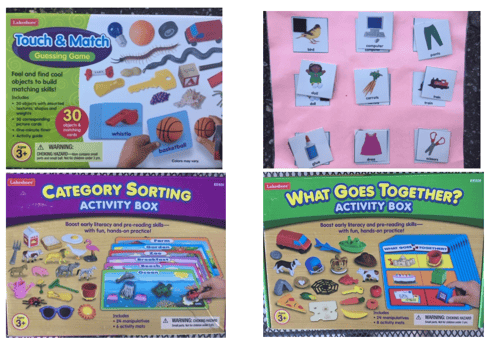 Activities involving matching pictures to pictures, objects to pictures can be an excellent way to engage autistic children. Since they struggle with the concept of symbolism, this can be a first step to understanding that words, though abstract, have meaning. Categorizing is a higher level vocabulary building activity that can be used with preschoolers who are just beginning to understand the lexical nature of language. Many first words and sentences can come from these games.

Toys that you might use with babies can be not only appropriate but necessary for severe preschoolers. I found that books with accompanying melodies and repetitive lyrics are the key to engaging those children who refuse to speak or make eye-contact. Toys based on familiar activities, such as eating ice-cream, are excellent for encouraging symbolic play and drawing out first words.

It’s March. Trees are growing their leaves back, flowers are starting to poke out from the ground,...
Read More

Self-Reflection: A Tool of Growth for Any Clinician

Clinicians are constantly looking for ways to grow and improve their skills. They attend continuing...
Read More